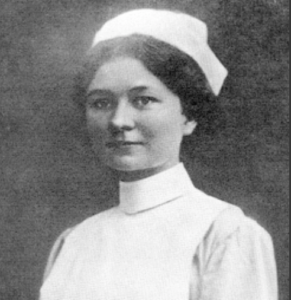 All rights reserved—no part of this book may be reproduced in any form without permission in writing from the author or publishers, except by a reviewer who wishes to quote brief passages in connection with a review written for inclusion in magazines or newspapers. Material out of copyright may be used, giving proper credit to original authors, sources, and book, Nurse Helen Fairchild.

Helen, who was my dad’s sister, was born Nov. 21, 1884 in Milton, Pennsylvania and grew up on a farm in Allenwood. She had 4 brothers and 2 sisters. Baby sister Blanche lived to age 3 but died when Helen was 4 years old. My father, Edwin was born when Helen was 7. He was a fragile baby and had to be carried around on a pillow his first year. Helen’s older brother became a doctor. I wonder, did the experience of death and illness influence Helen to go into nursing?

Or is it true what her sister, Chris told me when she was 92 years old?

She said Helen went into nursing because she was upset with her father.

She said Helen’s mother went visiting and said if Helen cared for the chickens she could keep the egg money, but … my grandfather kept the money. Aunt Chris told me that is what made Helen to decide, at age 26 to go to Phila. to become a nurse.

Around this time Victorian young women were becoming restless over their long hair, long skirts, petticoats, chaperones … and about not having the right to vote. It was the era of suffragettes. These women wanted the freedom to make choices about their life.

After Helen graduated, she stayed on working in Pa. Hospital. Helen wrote 100 pages to her mother.

They became my guide in telling her story. She often wrote, OH THE STORIES I’LL HAVE TO TELL WHEN I GET HOME, but she never got home.

The war in Europe broke out in 1914. Pres. Wilson won his second term in office on the basis he would not enter the war, but keep the US neutral.

In 1916, the Germans began sinking our cargo ships to Britain. The Luisitania was sunk, and the cause was under suspicion. Germany wrote to Mexico in what was called the Zimmermann Report, asking Mexico to join their side in the war. They promised when they won they would give Mexico Texas, Arizona and New Mexico. One government official suggested they should throw in New Jersey.

In the meantime, Helen wrote nothing of the news. Her letters refer to her mother as a worrier, which might explain it.

Instead, in 1916, Helen wrote she enjoyed ice skating, shopping, attending art museums and the opera. She said the streets were crowded, and everybody carried huge shopping bags, which hit your knees when you were in crowds on the street. Strawbridge & Clothier, Macy’s and John Wanamakers were the big stores in Philadelphia at the time.

In August 1916, the US was still neutral, but the doctors at Pa. Hospital felt they needed to be more prepared. It was at this time that Gen. Pershing was chasing Pancho Villa in Mexico. Pancho Villa was a Mexican renegade that had crossed our borders and killed and robbed our citizens.

The doctors came back and formed a fully equipped base hospital, and set up a rehearsal tent-city in Fairmount Park.

They also formed the US Army Reserve Nurse Corps, and 60 nurses from the surrounding hospitals in Phila. enlisted. Helen was one of these nurses.

Cleveland Clinic, Mayo Bros., Johns Hopkins, and New York and a St. Louis hospital followed suit. Each hospital supplied equipment for 500 patients, and these supplies would accompany them overseas.

On April 6, 1917, the US joined the war, with Pres. Wilson promising 4 million men to be sent overseas. The nurses seemed not to worry, assuming they would be sent to a hospital somewhere in the States.

Helen wrote: I have been offered a position at Great Neck, Long Island, a town about 40 minutes from New York. I will be a visiting nurse, and it pays $85 a month but living will cost me about $20 a month. Even at that, chances are good for the salary to go up to $100. I think too, I will like that kind of work for it wouldn’t be as confining as hospital work.

The first week in May, 1917, before taking on her new job, Helen visited her parents, Ambrose and Adda Dunkle Fairchild, as they moved from the farm in Allenwood to Adda’s former house on Main Street in Watsontown.

She wrote to my dad she needed to close the letter she was writing to him because her mother was “figiting.” That’s a new word, Helen wrote.

Her next letter to my dad on May 9 reads:

Dear Brother, Monday I got a telegram telling me to be ready to go abroad by Friday, so here I am, waiting for the pokey old government to get things ready for us to go. I am grateful to be one of the ones to go, but feel sorry for Mother … if only she wouldn’t worry so much.

Don’t feel uneasy about me, ever, for the folks at home will be notified immediately if anything should happen. Heaps of love, and write me right away. Lovingly, Sis

From the Adelphi Hotel, Liverpool, England, May 26, 1917: Dear Mother, Someday I will write you all that’s happened from the time we left NY last Saturday. We sailed at noon, and by 6 o’clock P.M. I felt as if the floors were coming up to meet me and the whole universe was whirling. You can

See I didn’t waste much time getting seasick, and I like to die all Sunday and Monday. Then on Tuesday we had para-typhoid vaccine. Everybody had to take it and everybody had quite a reaction. We were on the boat just 8 days.

Our boat is the SS St. Paul, classified as a fast auxiliary cruiser. It is 554’ long and 63’ wide. It can outrun most naval ships, but it is under gunned and has a combustible interior. It hauls 1,340 passengers, but there are only 600 of us on board. The other group of 60 nurses with us are from St. Louis, Mo.

Their Director is Miss Julia Stimson, and she wrote to her mother saying:

To be in the first ranks in this most dramatic event that was ever staged, and to be in the first group of women ever called for duty with the US Army…is all a too much good fortune for any person like me.

Julia Stimson wrote many letters to her mother. Because she was the director, she did not have her letters censored. Dr. Harvey Cushing from Boston Hospital, and Dr. George Crile from Cleveland Hospital, were the only two other people I know of who took notes and later translated them into books. Fortunately for Helen’s history, her path traveled along Stimson and Cushing’s path at critical times in her own story, and I could make good use of the information.

US censorship was so great that Dr. Cushing, to name one, had his Kodak taken from him upon landing in France. Photographs were not allowed until the date the war ended November 11, 1918.

On board the ship going over, Miss Simpson commented she had worried about the behavior of her St. Louis nurses until “she saw how the Phila. nurses acted.” She also tried to teach all the nurses how to march in military formation drills so that they could “march in decency and order when we have to.”

Stimson wrote in her book, Finding Themselves, when landing in Liverpool, England on May 28 “… we were welcomed by a Colonel Johnson, a man eminently fitted to take charge of 123 women. We were first taken to the Adelphi Hotel and then given liberty to see the city. The next day we nurses were taken to London by train, and tea biscuits were brought on,

And for the first time we partook of the great English custom of drinking tea. We were made to feel much wanted.”

Still in London on June 8, 1917, Helen wrote, “We were in a restaurant and the orchestra played the Star Spangled Banner and maybe we didn’t cheer. You never appreciate your own National Air until you hear it in some foreign land. On Wednesday we had tea with Miss Emily Sargent, a sister of John Singer Sargent, who is considered America’s most famous artist. We are being well treated, but I am ready to work. Heaps of love, Your very own Helen”

June 8 is memorable in that General Pershing crossed the English Channel with his small army to raise morale saying the Americans have arrived.

Contact the author, Nelle Rote for more details and possible libraries who have the book.